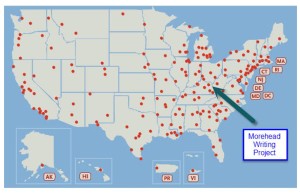 NWP works with educators P-16 to improve the teaching of writing using a unique combination of national, state, and local programs. NWP has been described as a “learning community” and “the most successful educational network in the history of American education” (Lieberman and Wood 2003). The reach of the national network is wide with NWP teachers providing “more than 7,000 professional development activities annually, reaching 130,000 educators, and through them, 1.4 million students.” Perhaps even more important is that while these programs have the backing of a national program, they are “designed locally to meet the specific needs of the students, teachers, and communities served.”

NWP began as the Bay Area Writing Project in 1974 when 29 teachers came together at the University of California at Berkley for the first Summer Institute, or SI, to teach each other their “best practices,” write and share their work, and read and discuss research (p. 7). The belief that teachers can and should be writers, researchers, and leaders is central to the focus of NWP’s work. Almost four decades later those core principles remain at the center of every Summer Institute at the more than 200 Summer Institutes taking place.

A select group of applicants are invited to attend the Summer Institute after undergoing an intensive application and interview process. This is a Fellowship program which requires a year-long commitment to pursuing growth as writers, teachers, researchers, and leaders.