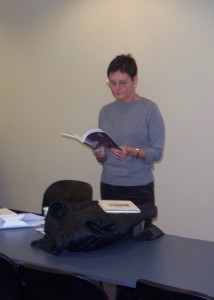 Maureen Morehead, Kentucky Poet Laureate, The Role of Place in Maureen Morehead’s Poetry: It is generally known that Southern writers anchor their work in place. Though she is not a native of Kentucky, having spent her childhood in central Illinois, Maureen Morehead’s longtime residency in the commonwealth has resulted in a poetry that is filled with the images and stories of her adopted state. As a Kentucky writer, she is part of a large, strong literary tradition that has always celebrated the state’s natural beauty and looked out for its best interests. In this lecture, Morehead will discuss how living in and learning about Kentucky has influenced and shaped her poems. She will read from her work to illustrate that influence.